Craig Patterson came to talk to CLHS students on April 13 about being an attorney.

Patterson graduated from Concordia in 1984. He has high regards for this new Lunch and Learn program because he never had a program like that back when he was in school.

“School is taking a lead on this to learn about different jobs and help make a decision if you have or don’t have an interest in the job,” he said.

Patterson works with Mark Witmer (1985 CLHS graduate) at Beckmann Lawson and has been working in Civil Law for twenty-five years with seventeen other lawyers.

Patterson didn’t even think about being a lawyer in high school or even once he got accepted into Law School. He went to Indiana University with a major in political science and a minors in history and economics. He graduated from IU Law School in 1992. He said that some people don’t even go to Law School to become a lawyer but to actually be a more rounded business person.

Patterson explained that the Bar Exam is a basic competence test consisting of eight hours of multiple choice, two full days of essays, and only 71% pass rate in Indiana. He said “It’s kinda stressful” with a laugh. He has a law practicing license in the states of Indiana and Ohio.

Civil Law is about companies and people having disputes about mostly money. Patterson explained what he liked about being a lawyer which included representing different kinds of people, being independent, deciding who you work with, when you work, and it’s like owning your own business.

Patterson talked about what attracted him to law.

“Law gives you ability to compete in a professional way” because Patterson is a natural born athlete who thrives on competition. He highly recommends people that enjoy reading and writing to pursue this career because that is majority of the type of tasks for being a lawyer. 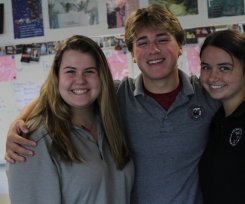